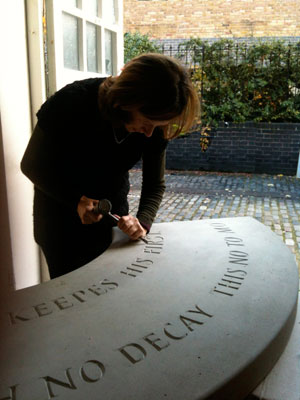 Emily Hoffnung worked as a sculptor for twenty years, involved in figurative work and bronze casting having studied sculpture at Camberwell School of Art from 1976 to 1980. Her fascination for lettering led her, in 2000, to attend City and Guilds Art School specifically to learn lettering and letter carving. She studied under James Salisbury and then continued her training by working as an apprentice to Martin Cook. She then went on to work for five years as an assistant at Richard Kindersley's studio. In September 2007 Emily set up her own letter carving studio in London taking on architectural and memorial commissions and other bespoke works as well as carving her own inscriptions. Emily has been closely associated with Memorials by Artists since setting up her own studio.

"It is fascinating how the meaning of a piece of poetry or quotation can be magnified when drawn in beautiful letters and carved into a piece of stone. In the same way the name of a loved person can take on a resonance when cut into this natural material which, we often forget, can be hundreds of millions of years old. It is this absorption with carved lettering combined with the laying out of text in interesting and inventive ways that is core to my work".


Recent features include:
The Financial Times, How To Spend It magazine.
Country Life Magazine click here